What is color? No object of itself alone has color.
We know that even the most brightly colored object, if taken into total darkness, loses its color. Therefore, if an object is dependent upon light for color, color must be a property of light. And so it is. 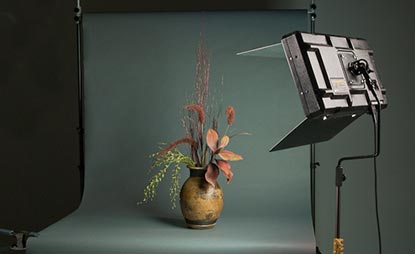 | We humans are lucky. Our eyes adjust automatically to subtle changes in brightness\, as well as differences in the color of light sources we may find ourselves in. For example\, if you walk indoors to a warm-lit living room from a dusk exterior where everything was lit cool blue\, your eyes will adjust to the differences in brightness & color almost instantly. The change will be largely imperceptible to you when it happens. So our eyes adjust to these differences automatically\, but how do todays digital cameras deal with them? While continuing to get better\, they still aren't quite so lucky. Most digital video & still cameras have the ability to automatically set both exposure and white balance\, self-adjusting them on the fly as lighting conditions change. If a camera is set to Auto-White Balance\, it will search the image for something it perceives to be white\, lock on it\, and then adjust all other color renderings in the image based on that decision. And yes\, in this mode cameras can be fooled. So their auto-exposure / auto-white balance imaging sensors & circuitry do a clumsier job of adjusting to both brightness & color changes in lighting conditions than the human eye. And if the adjustments happen while you are shooting video\, those auto-adjustments can be recorded & visible to the viewer in playback.
A less potentailly distracting option than auto-white balance is available\, but it isnt as versatile in dealing with the subtleties of real world lighting. We are talking about the camera's Preset White Balances\, which are factory default settings for the accepted standards of the most common lighting environments. | These installed presets are created based on the color reflection information of a white (or neutral gray) object\, lit by the selected color source (exdaylight\, or tungsten-halogen).

Note - Film stocks are created using the same concept, manufactured with emulsion color balances that anticipate being used in standard tungsten or daylight environments.
Using Camera Preset White Balances
All digital video & still cameras will have Daylight & Tungsten presets\, some will also have Fluorescent\, and Cloudy Sky settings. Most still cameras will have a preset for Electronic Flash\, which is basically the same as daylight. Selecting a preset white balance that fits the type of light being used can give generally pleasing results\, and can be a popular choice when you are working quickly. However using a preset that is different from the color temperature of your lighting can give pretty inaccurate results\, as some of the following photos will show. |

Cameras and Colors of Light
4 photos to show how camera white balance presets deal with color temperatures. Notice the color of the white card in each image.

Storing Camera White Balances
The real world doesn't always offers us ideal scenarios. We can often find ourselves in lighting environments that fall outside the confines of the camera presets, either for practical or creative reasons. Such as:
* The color temperature of the light source you are shooting in is different than the color of the preset (a scene lit only by blue sky with no direct sun may have a color temperature closer to 6500°K than the Daylight preset of 5600°K).* You are shooting in a room with several different light sources\, thus a mixture of color temperatures.* The creative needs of your production may require a different color mood than the standard rendering that the camera presets will provide.To move outside the confines of the Presets\, you will need to store your own white balance. When storing a white balance\, you should place a white or neutral gray card in the key (main) light of the scene\, place the camera on auto exposure\, and fill the image frame with the lit card before hitting the white balance button. Note - it is important that the camera be set to auto exposure\, to avoid overexposing the white card. If overexposed\, the camera will not read the color of the light on the card accurately. Note - Some cameras have a 'tunable' white balance where you can dial in the desired color temperature you want the camera balanced to. For an experienced user\, this can bring increased creative options.

Filtering Cameras
Film can be used with light it was not designed for, by using color correction filters on the camera lens. Another option is matching the various light sources with color correction gels, to create the color scheme the film was designed to work with. The Tiffen filters shown above offer cameras the following color corrections:
(A) - 5500K (day) to 3200K (tungsten)
(B) - 3200K (tungsten) to 5500K (day)
(C) - FLD for using fluorescents with daylight film or digital camera setting.
Filtering Light That We Cannot See
Light from beyond the visible spectrum can effect imaging. At the low end of the visible spectrum is Infrared light. While not visible to the eye\, digital sensors are very sensitive to IR. | The effect on the image is most notable in areas that should be neutral black but reproduce with a reddish tint. It can also exaggerate colors with red in them. This is partly caused by Far Red\, which is at the very edge of visible light just above Infrared. You may hear of these effects referred to as IR pollution or corruption. Not all sensors are the same so the effect can vary in intensity. (D) IR or Hot Mirror filters prevent infrared from striking the sensor\, so the blacks and reds appear truer to what the human eye sees when reproduced. A custom white balance should be done after an IR filter is added. A white (or neutral grey) reference can be shot to allow adjustments later in the processing or editing portion of the workflow. | At the high end of the visible spectrum is Ultra Violet light. Film is very sensitive to ultra violet light and many a spectacular landscape shot is rendered with a contrast-lowering bluish haze caused by the build-up of UV in the atmosphere\, over distance or high altitude. (E) A UV or Haze filter removes this extra blue for better color and normal contrast. The filters do not remove haze or color shifts due to mist, fog, or smoke. They may be clear to the eye or have light pink tint that can subtly enhance skin tones or have a slight warming effect.
Digital camera sensors are usually not overly sensitive to UV and don't require a filter; however a clear UV filter is still very often used to protect the front lens element against rain\, dust and scratching. |

While our eyes quickly and constantly adapt to make a scene appear normal to us, even when it contains multiple light sources of mixed color temperatures, film and digital cameras can only be balanced to one color temperature at a time. This can create some problems, but but at the same time it can also open up creative possibilities.

As we have seen, the real world we want to light & shoot rarely offers us environments that are all daylight or all tungsten. Earlier in this lesson, we saw the results of choosing daylight or tungsten color in these settings. While most light souces have traditionally offered one color temperature, recent developments in lamp techology and fixture design have brought some new possibilities for color mixing. This can help find a middle ground in mixed source locations, or give you instant access to either day or tungsten color.

Color of Light Meets Color of Skin
Certain colors of light are more complimentary to certain colors of skin tone. In general, tungsten-halogen color is more flattering to a caucasion skin-tone. it gives a warm healthy glow, especially in winter or other times when skin tones can be pale. Using daylight creates a pale look, more washed out. In certain situations, this is a creative choice that can have a lot to offer.
The opposite is often true for African skin-tones. The yellow tones of tungsten can get absorbed, and make facial details look too warm and murky. Daylight color, however, provides an effective contrast, giving strong contrasting highlights to facial features.

Next Article in Topic

Not finding what you're looking for? Contact Us Directly